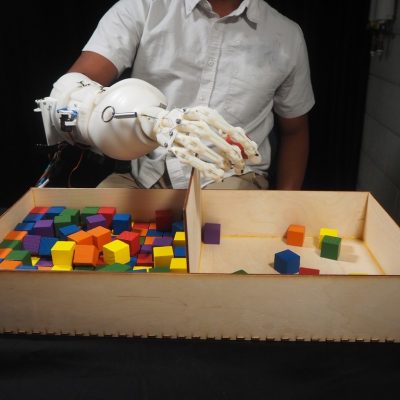 The majority of currently commercially available prostheses offer limited or no haptic feedback to the user. For upper-limb amputees, two current options are body-powered and myoelectrically-controlled prostheses. Amputees operate body-powered prostheses by using their opposite shoulder to pull on a cable, controlling the grip aperture of the attached hook end-effector. Because of this direct connection with the end-effector, body-powered prostheses provide amputees with some vague haptic sensations; however, they typically offer limited degrees of freedom for manipulation. Myoelectric prostheses, controlled by muscle activity detected through electromyography (EMG), allow for higher degrees of freedom for manipulation but eliminate direct connection with the end-effector. For both options, amputees cannot feel crucial, high-fidelity haptic sensations of the interaction between the prosthesis and the environment and are forced to rely heavily on vision, which can be mentally taxing.

Previously, our group compared the efficacy of cutaneous and kinesthetic haptic feedback modalities for myoelectric prosthesis users through sensory substitution in a stiffness discrimination task, using the haptic devices shown below. We are currently studying the effect of haptic feedback on task performance and mental effort in a dexterous manipulation grasp-and-lift task. 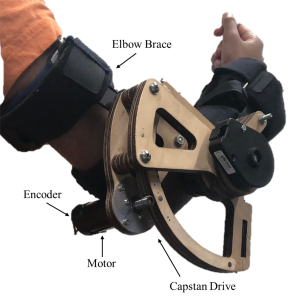 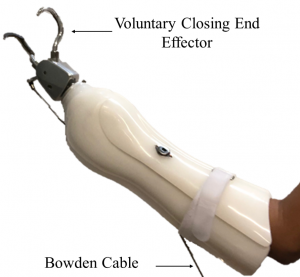 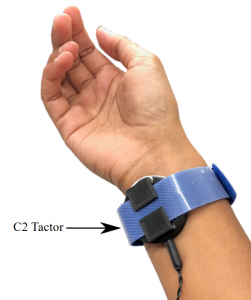 The inherent haptic force feedback in body-powered prosthesis is thought to be one of the main reasons it has remained a popular choice for amputees, despite remaining relatively unchanged since its development over 60 years ago. This claim, however, has never been experimentally validated. A main reason for this is that removing haptic feedback from the prosthesis without also removing the ability to control the prosthetic gripper is next to impossible. However, empirical evidence of the benefit of haptic feedback would be useful for researchers considering similar haptic feedback strategies for myoelectric prostheses.

To answer this question, we developed a unique, body-powered prosthesis which featured removable haptic feedback. In this prosthesis, a cable-driven elbow exoskeleton was used to control a cable-driven, voluntary closing prosthetic gripper through two linear actuators.  These actuators are electrically connected, and they can separately regulate the transmission of the control input from the body to the gripper and the feedback from the gripper back to the body. Using this unique prosthesis, we found that the haptic force feedback available in a body-powered prosthetic gripper provides more utility than vision alone, which is what is currently available in myoelectric prostheses. 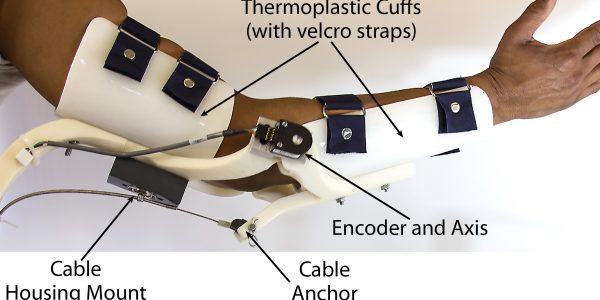 Substantial progress has been made in the control of myoelectrically driven upper-limb prosthetics, which has improved the quality of life for many amputees. However, one of the biggest complaints that amputees still have about these commercially available prosthetics is the lack of tactile feedback. Tactile feedback is crucial not only for highly dexterous tasks, but also for basic manipulation of objects in daily life. The somatosensory system can portray a large spectrum of tactile sensations that run the gamut from vibratory to proprioceptive information. With a traditional myoelectric prosthesis, these cutaneous and kinesthetic sensations are not possible. In contrast, a body-powered prosthesis provides proprioceptive information through the forces of the cables and harness as the user operates his or her prosthesis. This is a key reason why many users choose a body-powered prosthesis over a myoelectric prosthesis.